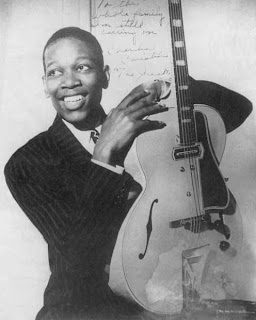 Charlie Christian was born in 1916 in , , but he grew up in . Both his parents were musicians. After his father lost his vision to disease, Christian and his brothers performed as a buskers to support his family. At first Charlie entertained by dancing; later he learned to play the guitar. He was encouraged at school in his music, but his instructor insisted he learn trumpet instead of the tenor saxophone. Charlie soon quit the school band to pursue his other passion, baseball, at which he excelled.

By the time Christian was twenty, he was performing throughout the Midwest, traveling as far as and . By 1936, he had acquired his first electric guitar and had begun to establish himself as a one of the most prominent musicians in the region. Important musicians passing through would stop to hear him including Teddy Wilson and Art Tatum. In 1939, pianist Mary Lou Williams heard Christian and told John Hammond, Sr., the record executive who scouted talent for the "race" records division, about him. , in turn, alerted Benny Goodman to this new talent.

From the description above, the story would seem to be a happy, history-making collaboration of two geniuses. The fact is that Goodman was not in the least interested in the fancy, new electric guitar, which he regarded as a curiosity, and he initially didn't much like the flashy-dressing Christian.

Goodman was first made aware of Charlie Christian by John Hammond, who had heard Christian playing in in 1939. Goodman chose to ignore the advice. was persistent, however, and, during a break at a concert, moved Christian into the band. Upon returning from break, Goodman, who was very strict with his musicians, was incensed to find Christian onstage. To destroy Christian and stop from hounding him, Goodman called for an obscure tune, thinking that if Christian didn't know the song, he surely wouldn't be able to play along. Christian responded with a brilliant forty-five minute long improvisation. The moment was historic; as the Carnegie Hall concert had brought jazz into the American mainstream, Christian's solo brought the electric guitar into American music.

Christian's musical abilities converted Goodman on the spot, and Goodman immediately absorbed Christian into his musical organization. Henceforth Christian composed many of the "head" arrangements (the accompaniment to the basic song), took solos in many of the songs in performances and on recordings, and was an inspiration to the musicians with whom he worked. Christians playing was forward-looking in its offbeat accents and altered chords. The job gave Christian a steady income and a public platform, and he used the years spent with Goodman (1939-1941) to refine the instrument, its popularity, and his playing, often by sitting in on jam sessions on off-nights at Minton's jazz club in . Christian died in 1942 of tuberculosis.

In the many of the recordings from the period, notice the vibes (essentially an electric xylophone), another instrument new to jazz, and the arrangement and feel of the music. The unison playing of the melody to open and close the piece (called the "head") anticipates hard bop practices. There is no compromise to the decidedly "hot" quality of the music. Goodman's brand of Swing, at least in the peak years, always stayed closer to jazz than to commercial music (Sweet) and did not make the same commercial concessions for popularity as those made by Glenn Miller. In that respect, this music is a suitable platform for later bebop. Many recordings made between 1939 and 1941, both using the sextet, feature Lionel Hampton and Charlie Christian and their new instruments.

Posted by Richard Metzger at 7:17 PM