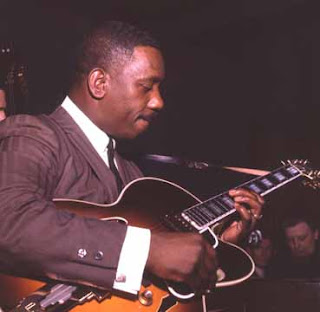 John Leslie "Wes" Montgomery was born in 1923 in . His family was a musical one. His two brothers were both jazz performers, Monk on string and electric bass, and Buddy on vibraphone and piano. started to learn the guitar at age nineteen and, like so many of his contemporaries, taught himself by learning by ear every note of every solo of Charlie Christian from records. The undertaking led him to his first musical job with no less than Lionel Hampton, who hired because he knew and could play all the Christian solos and because he had the remarkable capacity to learn almost instantly complex solos and chord structures by ear. never learned to read music well. , of course, was a Goodman alumnus and recorded with Christian. Like Christian, Goodman had helped to introduce and establish the vibraphone which, like the electric guitar, was new and not accepted in the jazz world.

toured with ’s orchestra from 1948 to 1950. He is heard on many of the orchestra’s recordings made in this two-year span. After leaving ’s organization, he returned home and did not record any significant music until 1957, when he participated in a jam session that included his brothers and which introduced a new figure to the trumpet world, Freddie Hubbard. He continued to record with Hubbard and his brothers through 1959.

Back in , struggled to support his family of eight. He worked in a factory during the day and played in local clubs until late, effectively living for years on two or three hours of sleep a night. Cannonball Adderly heard in one of these clubs. He was so impressed that he arranged the meeting between Riverside Records executives and Montgomery.

signed with Riverside Records in 1959, and remained until the company went bankrupt in 1963. The recordings made during this four-year span are regarded as ’s best and most influential. Nearly all the settings are for small ensemble, usually a trio, quartet, or quintet and most often with piano, bass, and drums as the other instruments. The playlist invariably alternated between driving upbeat numbers and soft ballads, and the playlist included many of his compositions. The personnel often included his brothers, Melvin Rhyne, an organist, and various other musicians such as Adderly and the Wynton Kelly Trio, Miles Davis’ previous back-up band. John Coltrane asked to join his group after a jam session but chose to remain the leader of his own groups.

signed with Verve Records in 1964. The contract resulted in a stylistic shift that many regard as a decline in ’s creative talents and importance. Many of the records used an orchestra and ratcheted down the edge that made important in the first place.

’s work from Bumpin’ (1965) paved the wave for the formulation of a new style of music, “smooth jazz.” Although continued to play hard driving jazz in public appearances, including his European dates, and his entries in Verve’s catalog included a few pure jazz albums, Bumpin’ represented a huge step away from jazz and toward commercial music.

“Smooth jazz” was a sub-genre, then, of jazz which drew upon other contemporary styles to make the music more accessible. The majority of tracks featured a much stronger melody than jazz but not than commercial music. The tempi of jazz were slowed to an easy, laid-back pace. The backgrounds tended to become more predictable, more formulaic, almost like canned music, and the edge of these backgrounds was blunted by the use of strings or other orchestral instruments. The favored instruments in this style were first the soprano or tenor sax, with the guitar coming in second places. ’s increasingly mellow and commercial music opened the door to musicians such as George Benson and Kenny G, and the ensuing style called adult contemporary.

’s work, especially in three albums produced by Creed Taylor for A&M Records beginning in 1967 showed an abandoning of jazz in favor of a purely commercial style. The songs on these records were drawn not so much from his compositions or the jazz repertory, but from the commercial radio genre. The result was a “hip” but diluted jazz guitar rendering by , against an orchestral background, of hit songs by various pop artists such as Dionne Warwick (“Say a Little Prayer for You”), Simon and Garfunkel (“Scarborough Fair”), the Beatles (“Eleanor Rigby”) and the Mamas and the Poppas (“California Dreamin’ ”). His part was little more than recitation of the melody, with little or no improvisation at all. These commercial recordings did earn him considerable wealth and recognition and, perhaps more important, lead a newly interested public to his earlier, purer recordings.

The recordings were a huge commercial success, but would not live to reap the rewards. He died in June 1968 of a massive heart attack, doubtless the fruit of years of functioning without sleep and his two-pack per day Lucky Strike habit. The various periods of his music left a lasting mark, influencing such musicians as Pat Martino, George Benson, and Pat Metheny, as well as a host of truly mediocre musicians.

His playing style was an unusual one in that he did not pluck with his fingers and he never learned to use a pick. Instead he plucked with his thumb, with the fingers of his hand splayed on the guitar face for support and balance. Since he worked late hours and often practiced between the end of the gig and the beginning of his early morning shift at the factory, he played with his thumb instead of a pick in order not to wake his wife. The use of the thumb gave a bassier, mellower tone than that of his contemporaries. Hs thumb was double jointed and he could bend it back to touch his wrist, and little carnival trick he loved to use to make people uncomfortable. Even so, did not like the brittle treble sound typical of acoustic guitars or of electric guitars played with a pick. He usually adjusted the settings on his guitar so that the treble pot was closed completely, that is, so that the bass was favored in amplification. It is a sound much emulated by today’s players. Note right hand in pictures below.

Critics have noted that his approach to soloing was multi-tiered. He followed the combo tradition of playing the head (melody of the composition) in single notes for the first and last stanzas, grounding he piece. The usual improvisational treatment of the first stanza or two was to use single-line melodies. In the subsequent stanza or two, usually played his improvised in parallel octaves, a device first used by Christian but developed to its apogee by . Both the single-note and octave passages heavily utilized sequences. The stanza in octaves would usually culminate in chromatic chords.

’s work did not go unnoticed by the music industry. He was nominated for two Grammy Awards for Bumpin' in 1965; received a Grammy as Best Instrumental Jazz Performance by Large Group or Soloist with Large Group in 1966 for “Goin' Out of My Head”; nominated for Grammy Awards for "Eleanor Rigby" and “Down Here on the Ground” in 1968; and nominated for Grammy Award for “Willow, Weep for Me” in 1969. His album, The Incredible Jazz Guitar of Wes Montgomery, earned him Down Beat magazine's "New Star" award in 1960. In addition, he won the Down Beat Critic's Poll award for best Jazz guitarist in 1960, 1961, 1962, 1963, 1966, and 1967.

Posted by Richard Metzger at 7:06 PM