Working the Blues 6: Melodic Characteristics of the Blues, Choosing the Correct Scale, and Reconciling the Scales to the Chords 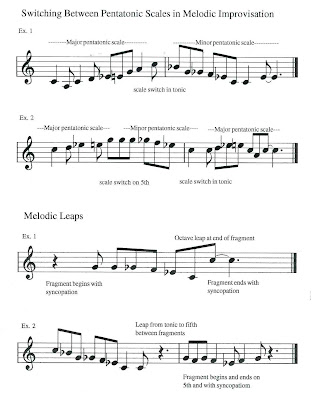 Melodic Characteristics
The melodic structures found in blues and many jazz styles derive directly from the work songs and musical practices brought from Africa with slavery. The features of the music were incorporated into nearly all American popular music styles.

The following features can be used in forming and shaping improvisations:

2. These fragments tend to be rhythmically very busy and tend to move at a much faster rate than the accompaniment.

3. In the beginning, the melodic fragments of an improvised melody should start and end on either the tonic note or the fifth. Later chord tones may be used as starting and ending notes.

4, Motion through he scales tends to be stepwise, that is, regardless of the scale used, if one starts on the tonic note and wishes to play to the fifth note of the scale, then he must play all the notes in-between.

5. Stepwise motion through the scales can be relieved and interest created by repeating notes or by changing directions.

6. Leaps, at least for beginners, are restricted to tonic to tonic, tonic to fifth, fifth to tonic, and fifth to fifth. Later chord tones may be added to the list of possible leaps. The leaps often occur not in the motive, but between motives.

7. Vocal ornamentation can be carried into guitar improvisation. Ornamentation comes in two varieties. The first is the glissando or slide. Here one can place his finger one note lower (half-step, whole step or more depending on the time available to execute) than the position of a note in the scale, pluck it, then slide his finger to the note that actually exists in the scale. The approach to the scale note is nearly always from below. Any note in any scale may be given this treatment and the ornament may be applied at any time.

A second ornament is the "bent" note. This is created by pulling or pushing the string upon which the note is fingered. There are only two notes that should be bent in the beginning of your study--the fourth and the flat fifth. When bent, these become notes that already exist in the scale. If you bend other notes, notes that are not in the scale or key are introduced, and these notes do not create good effects.

Scale Choice and Shifting Between Scales
The scale that you choose to use over a given chord is actually very liberal. Either pentatonic scale and any combination of these scales may be used with great success and musical interest over any chord but with one CRITICAL exception: the major pentatonic scale may not be used over the IV7 chord. The scale contains the natural3rd interval but the IV7 contains as its 7th the flatted third. The result of simultaneous sounding of these two notes is a musical train wreck.

In blues, the "safe" scale is the minor pentatonic. It may be played over all chords effectively. Here the quality of the melody is wholly dependent upon the cleverness of the improviser and not a function of having to match a particular scale to a particular chord. The use of the minor pentatonic scale frees the improviser to concentrate on creating melodic motives since he does not have to follow the chord changes. Anything he plays within the scale will match the chords. The benefit of using only the minor pentatonic scale does have its downside, and the downside can be for most huge. It is very difficult to create engaging solos using on this scale and there is a redundancy and limitation to melodic possibilities. In brief, it all sounds the same in a very short time. Professional musicians who use successfully but exclusively the minor pentatonic scale have a very special gift.

For the listener, the use of both scales offers surprise and relief. Both scales share the tonic and the fifth but otherwise use different notes (the major pentatonic scale contains the 2nd, 3rd, and 6th; the minor pentatonic contains the flatted 3rd, 4th, and flatted 7th). The listener cannot anticipate the notes he will hear in the improvised solo, and the surprise at hearing keeps him engaged. Interest is also added in that the scales are derived respectively from the major key and the parallel minor (the minor scale from the same tonic note), and so the use both scales in combination or alteration effectively creates a continual switching in the melody from the major to the minor mode or key.

Changing from one scale to the other can be problematic, especially for beginners who have not yet learned all the locations of all the notes in the chords. The most effective way to start is to use either the tonic or the fifth of either scale, since they are shared notes, as the "switching stations." Bear in mind the tendencies of scale motion described in earlier articles. Examples of switching are illustrated in the graphic above. Remember that you can click on the image to enlarge it.

In gaining mastery, you are encouraged to use a recording program (Audacity can be downloaded for free if you don't have a recording program loaded already). You should make a good rhythm track of the chords over which you can experiment improvising melodies. This step is essential to hearing what works but also in internalizing the changes of the progression so that your reactions when improvising are instinctual. Once the fingers react without the mind having to search out notes, the improviser actually begins to hear in his head the melody he wishes to build before he plays it.
Posted by Richard Metzger at 6:52 PM