The Advent of “Thinline” Archtops 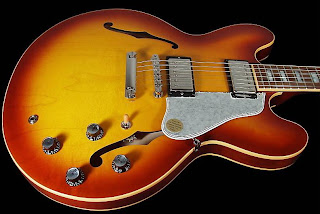 The early electric archtop guitar was well able to hold its own against the loud but acoustic instruments of the Swing band and even the small jazz combo of the 1950s and 1960s. As noted, its sound was essentially that of an amplified acoustic guitar. The problem presented, however, with the larger venues of the rock 'n' roll scene of the late 1950s is that the depth of the body of electric archtop guitar was the same as that of the acoustic guitar (3 3/4 inches), and this depth prevented the instrument from being played loud enough to be heard in venues larger than the supper club or the Blues or Jazz club. Turned to full loudness, the guitar simply produced "feedback" screech. Feedback occurs when the microphone or pick-up reads not only the sound intended to be amplified but also itself.

Early rock 'n' rollers stuffed towels into the bodies to reduce the volume of vibrating air inside, and within a short time, Gibson began to offer an archtop variant with a thinner body cavity called the "thinline." The guitar depth was reduced by at least two inches and the interior volume further decreased byt the insertion of a wood block that holds the pick-ups (the squares under the strings). It retained much of the original electric archtop's sweetness, but eliminated feedback at high levels of volume. The thinline guitar was immediately embraced by electric Bluesmen (i.e. B.B. King uses one, who plays "Lucille," probably the most famous ES 335 in history) and rock 'n' roll players (Chuck Berry). Most jazzmen continued with the deeper-bodied archtops since they did not need to play as loudly and wished to retain as much of the original tone as possible. Thinlines, however, are seen often enough today in the hands of working jazz guitarists who need practical solutions in live playing. Above is an example of the industry standard of thinline electric archtops, a Gibson ES 335.

Posted by Richard Metzger at 4:30 PM