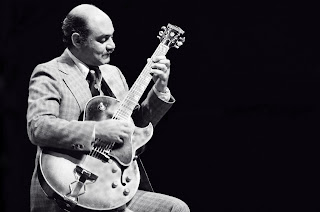 was born Joseph Passalacqua in , in 1929. He was raised in , however, where his Sicilian-born father was able to find work in the Steel Mills. Pass was inspired to play the guitar not by any member of his non-musical family, but by Gene Autry’s performances as the singing cowboy. By age nine his father recognized the boy’s abilities and encouraged him to play a wide range of music, including music by ear.

By age fourteen, Pass began playing with dance bands including one led by Charlie Barnet. From dance bands he jumped to traveling with small combos, and the business ultimately led him to move from to . Here he quickly developed a heroin addiction, losing most of the 1950s to drugs.

After two and a half years in Synanon, the drug rehabilitation center in , he began to rebuild his career, recording in 1962 his first album, The Sounds of Synanon. In 1963, he received an important career boost in the form of Downbeat Magazine’s presentation to him of its “New Star Award.”

Throughout the 1960s Pass toured with blind jazz pianist and composer George Shearing, but the majority of his jobs came in the television and studio recording industry. He appeared as part of the band for The Steve Allen Show, Johnny Carson’s Tonight Show, and The Merv Griffin Show. In the recording studio, he served as sideman to Frank Sinatra, Sarah Vaughn, Della Reese, and Johnny Mathis, among others.

During the 1960s, Pass performed frequently at Donte’s nightclub in with his friend Herb Ellis, and the collaboration led to two legendary recordings in 1970. These recordings also featured Ray Brown on bass and Jake Hanna on drums.

In the early 1970s, Pass signed with Norman Granz’s new label, Pablo Records, and under this would continue with several other legendary collaborations. Pass recorded four albums with Ella Fitzgerald. As a part of the Pablo “stable,” he also performed with Benny Carter, Milt Jackson, Zoot Sims, Duke Ellington, Dizzy Gillespie, Count Basie and, of course, Herb Ellis. Pass continued to record with some of the top jazz artists through the 1980s.

In 1974, Pablo released an album called The Trio featuring the Oscar Peterson Trio but with Pass now in the guitar chair. It won the Grammy that year for “Best Performance by a Group.” Finally, Pass worked with Bill Thrasher on a series of music instruction books called the Joe Pass Guitar Style, and these books have since become the mainstay for student guitarists.

Because Pass’s father encouraged him “not to leave spaces” between the notes of the melody, he developed playing skill unlike any of his contemporaries. Pass was exceptional as both a lead guitarist in ensembles and as a stand-alone soloist. Hence his style not only included straight melody, but also sophisticated harmonic interpolations, polyphonic linear fills, two-voice textures, and rapid changes in the speed of the figuration within leads. He often superimposed his solo style of playing onto ensemble textures. Pass plucked with both his right-hand fingers and a flat pick. Pass cited as his primary influences the music of gypsy guitarist Django Reinhart and saxophonist Charlie Parker.

Pass died in 1994 from liver cancer in but is buried in the family plot in .

Joe Pass plays "All the Things You Are"

Posted by Richard Metzger at 7:10 PM