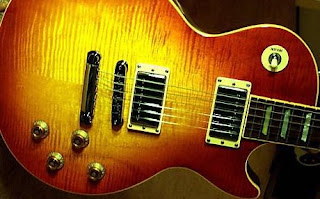 Once past the numbing shock of their decision to dismiss Les Paul as a crank, Gibson guitar made a truly intelligent decision: they decided to eat crow and woo Paul back. The result was a guitar design in which the sweet tone of the archtop guitar could be combined with all the practical advantages of Fender's solid body guitars, including capability of producing the characteristic brittle tone.

Paul would not work with Gibson to produce a viable solid body guitar unless he had full control over the design. Paul took his original 'plank' concept but made the plank about an inch and three quarters deep, about twice the depth of Fender's guitars. The original plank, invented when he was a teenager as part of his exploration into radio electronics, was a section of a railroad tie! He then hollowed out the area immediately surrounding the pick-ups but not the area further out toward the sides. The result was a guitar that could capture some of the sweetness of the hollow body guitar, all the brittleness of Fender's solid body guitars, and damage the hearing of anyone who stood too near.

After some wrangling and several versions, the president of Gibson, Ted McCarthy, flew a version to the guitar to Delaware Water Gap, where Paul was recording. After spending an entire night playing the design, Paul approved the version which now bears his name and which is probably the most popular guitar produced in history. Many significant guitarists are identified with the Les Paul guitar, including Jimmy Page and, no surprise here, Les Paul! During the 1950s and early 1960s, Delaware Water Gap, which is in Pennsylvania, just across the line from New Jersey along Route 80, had the most important music recording studio on the East Coast. The location for a studio was chosen because it was close to New York but just outside the noise of the normal flight paths of commercial airliners!

The primary shortcoming of the Les Paul guitar is weight, which is considerable and quite uncomfortable to play standing. If you watch closely at concert footage, you will notice that Les Paul players use very wide straps to prevent cutting into the soft tissue at the top of the shoulder.

Posted by Richard Metzger at 3:59 PM