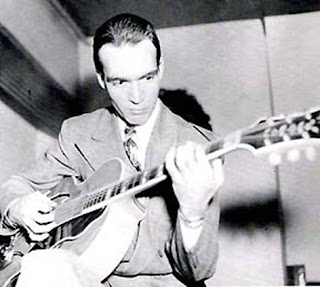 Like many of his contemporaries, Johnny Smith’s story is one of struggle from poverty, self-instruction, and incredible natural talent. Unlike his peers, Smith’s talents were extensive and not limited just to the guitar--he was equally at home on the trumpet.

Smith was born in , in 1922, the son of a foundry worker with modest five-string banjo skills. Home jams with friends were Smith’s earliest experiences with live music, and the only opportunity he had within the home to try his hand on his father’s friends’ guitars.

When the Great Depression closed the foundries, his family migrated first to , then to , and finally to . Smith still did not own a guitar but managed to gain access through a deal he made with the local pawn shop owners—he would keep the guitars in tune in exchange for being allowed to hang around and play. By the age of 13, he had progressed in his self-guided study to the point where he had adult students coming to him for lessons. Smith got his first guitar when one of these students bought a new guitar and gave him the old one.

Within a short time Smith was playing six nights a week in a band called “Uncle Lem and the Mountain Boys.” This was a hillbilly band, complete with costumes, which traveled across doing pop songs, folk songs, polkas at social events ranging from square dances to fairs. He earned $4 per night—big money for the Depression.

Around this time Smith discovered jazz, and his efforts changed to copying the big band music he heard on the radio and on records. By age 18, he felt he was ready to take on the jazz world, and he left the Uncle Lem to form the Airport boys, a jazz trio consisting of two guitars and a stand up bass. Smith arranged the music for the group, emulating the styles of his heroes Charlie Christian, Django Reinhardt, and Les Paul.

By 1942, his plans to storm the jazz scene abruptly change when the war required that every eighteen year old male deliver himself to the selective service office. Smith had always been interested in aviation (hence “Airport Boys’). So he enlisted in the Army Air Corps, the forerunner of the Air Force, with the intent of storming instead the enemy.

His less than perfect vision in one eye changed his life path in a very different direction. Instead of flying, he was assigned to the band. Since the military bands of the time had no guitar, the band leader handled him a cornet and an instruction book and told him to get busy or face the prospect of mechanics school.

Remarkably, Smith was able to progress to the point in two weeks that the band kept him. In short order Smith advanced to first chair cornet in the 364th Air Corps Band. In 1943, he was reassigned to the 8th Air Corps and ordered to assemble a jazz band. Finally he had a chance to use his guitar. Glenn Miller heard one of the performances and was so impressed that he tried to “requisition” Smith for his own band. Miller’s aircraft was lost over the a short time later, so Smith stayed where he was.

After the war, Smith secured work as a staff musician at the NBC radio affiliate in . At night he played guitar in the local nightclubs and trumpet in a vaudeville theater pit orchestra. His reputation as a musician already began to extend far beyond . Eugene Ormandy invited Smith to be the guitarist for the Philadelphia Symphony Orchestra. At the same time, his station manager sent some demo tapes to NBC headquarters, and the manager in was so impressed that he offered Smith a position as staff musician and arranger.

The job at NBC in put Smith at the top of the professional music world. A staff musician was expected to play any style of music practically at sight and hence carried terrific pressures, but the pay offset the stress. Smith played as many as thirty five radio and later television show per week for NBC including Highways in Melody, The Arthur Godfrey Ford Road Show, Star Time with Benny Goodman and Frances Langsford, The Patrice Munsel Show, The Dave Garroway Show, The Ed Sullivan Show and NBC Fireside Theater. Smith also carried outside engagements including appearances with the New York Philharmonic, the Philadelphia Symphony under Ormandy, and the NBC Symphony under Toscanini, as well as numerous gigs in ’s world-class nightclubs.

Smith’s primary interest remained jazz and, after recording with Goodman in 1951, he formed his own jazz combo. The combo was in high demand, often playing engagements at Birdland that lasted as long as twenty-two weeks. Here Smith and his group shared the stage with jazz greats such as Charlie Parker, Thelonious Monk, Dizzy Gillespie, Bud Powell, Erroll Garner and Charles Mingus. He recalls that Parker would often come into the club on the nights that he played, sit at a table closest to him, and just listen. The original lineup of the Johnny Smithy Quintet included Stan Getz, another NBC musician, and sometimes Zoot Sims on saxophone. The affiliation with Smith launched Getz’ career.

The quintet’s 1952 recording for Roost Records of “Moonlight in Vermont” became one of the best-selling single in the jazz genre of all times, and established Smith once and for all at the top of the jazz world. It also made his trademark style of playing—smooth chord-arpeggio solos with incredibly fast runs interspersed—instantly recognizable to the general public. The opening chords of Smith’s solo on “” demonstrate how he weaves his lines around arpeggio shapes.

Another innovation in treating solos and chords is heard in "Lover Man." Near the end of the piece, it sounds as if there are two guitars--one holding the melody note and the second playing chords. It is in fact only Smith, and the effect is created by holding a finger on the high, sustained melody note while playing chords on the lower strings with his remaining left hand fingers!

The lure of jazz ultimately required Smith to rethink his employment, and he renegotiated a contract as freelancer at NBC so that he could play engagements with his quintet, and tour as featured artist, first with Stan Kenton’s band and then with Count Basie. In 1955, Smith composed a jazz ditty that would later and inadvertently become one of the best known of all surf anthems of the 1960s, “Walk, Don’t Run.” Those of you who play jazz standards will recognize the song as a reworking of "(I Leave You) As Softy as a Summer's Morning."

In 1958 Smith's second wife died, and he became the sole guardian of their four-year old daughter. Faced with the choice of a music career or his daughter’s well being, he chose to quit the business and care for his child. Within weeks he moved into a modest house in and away from his frantic life as one of the century’s top jazz guitarists. Throughout the 1960s, he intermittently returned to to record and play engagements at the Birdland, effectively keeping his jazz career alive. After the decade, he decided that he was actually happier staying home and retired from the road.

Posted by Richard Metzger at 7:16 PM