The Principle Tool Behind American Popular Music from Mid-Century: the Electric Guitar 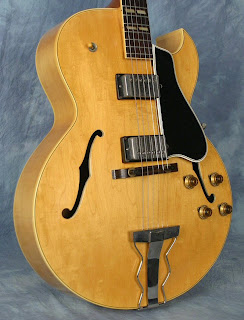 The evolution of the electric guitar is a story of advances that occur as needed to meet the latest specific need. The banjo of New Orleans Jazz was loud enough to be heard in small ensembles, but it was not capable of playing the sophisticated chord structures that emerged as jazz moved from simple I-IV-V harmonic progressions to include other chords in the key, chords borrowed from other keys and, most importantly, chords expanded by the addition of 7ths, 9ths, and 13ths. The number indicates that a note has been added to the chord and that the added note is the indicated number of scale notes higher than the root of the chord. A C7 chord, then, is a C chord with a note seven scale steps higher (here, B flat) added to it.

The guitar could play these advanced chords, and soon the banjo was supplanted by it. The great shortcoming of the guitar, however, was that it was not loud enough to be clearly heard in orchestral settings. The "wump, wump, wump" that is clearly audible in Swing recordings is the guitar playing the chords. The sound of the guitar is akin to someone sawing wood, but that is the greatest level of loudness that pre-electric guitars could muster.

As a result, the guitar strummed chords in Swing orchestras and that's all it did. The use of the guitar as a melodic instrument was confined to groups that consisted entirely of other strings, as you can hear on the recordings of blues musicians such as Tampa Red. These groups often did not feature drums but did include a singer (or two), a bass, and usually two guitars.

Two advances emerged in response to these shortcomings. First, the conventional guitar, with its flat face and round sound hole was modified in body configuration to have the face and back of the violin--a carved arch shape. This experiment in applying violin technology to the guitar was the work of Lloyd Loar, an employee of the Gibson String Instrument Company from 1919 to 1924, and his initial experiments were actually intended to improve the sound of the mandolin. The re-configuration reduced sustain, a feature undesirable in fast-moving jazz to avoid the over-ring of unwanted notes, and bolstered the higher registers of the instrument.

The second advance was the electromagnet--a coil of thin wire wrapped around a metal rod--and its application as a microphone or, in modern terminology, pick-up, built into the face of the new archtop. There are varied histories regarding who was first to do this, and the claims of the invention of the electric guitar range from the Dobro Company to the guitar immortal and multi-track recording pioneer, Les Paul. The first viable commercial electric guitar, however, appear in 1936 as Gibson's archtop ES150 (ES=Electric Spanish).

The electric archtop guitar saw wide use in Swing and in other genres. The expanded capabilities permitted the guitar to step forward as a solo instrument, as you have read in the section on Charlie Christian and Benny Goodman. The "sound" of the electric archtop guitar tends to remain somewhat true to the sound of the acoustic guitar, though the sound is often described as "sweeter." Probably the most important of all jazz archtop guitars, as it appeared first in the 1950s and does to this day, since it is still in production, appears above. It is known as the Gibson ES 175, and it is the guitar that you can hear on the recordings of a significant number of jazz guitarists through the 1950s and 1960s. Guitarists include Joe Pass and Herb Ellis, both of whom used single pick-up versions.

Posted by Richard Metzger at 6:21 PM