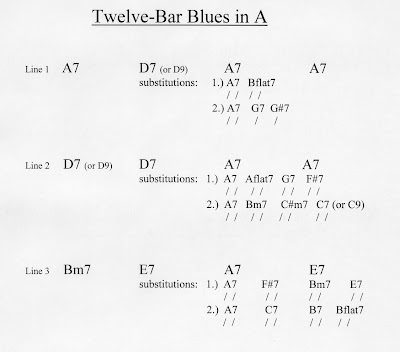 The twelve bar blues progression first appeared in the prints of W.C. Handy and began to stabilize as a preferred progression in the music of Bessie Smith and Louis Armstrong. By the late 1930s, it had become associated with Chicago bluesmen such as Tampa Red. It has since come to be known as "Chicago Blues."

This stanza form contains three, not four lines, and the form itself can be traced to the 19th century Spiritual. In the example, each chord gets four beats. In the cases in which more than one chord appears in a measure, the front slashes tell how many beats each should receive. There are also possible chord substitutions given below each line. These substitutions do not have an impact on the melodic improvisation of the lead play but, in fact, add an immeasurable and invaluable interest to the accompaniment and the overall piece. The player can choose his set of substitutions, but the substitutions are restricted to the measures under which they appear.

In playing these chords, at least until you develop advanced comping skills, there are conventions that extend back to banjo playing in New Orleans jazz and extend through Swing and modern blues. Each chord is strummed downward on the downbeat. There is no upward strum between the beats. The chords on the second and fourth beats are accented by being played slight louder, and they are played staccato, that is, cut off as soon as they sound. The role of the rhythm player is just that--he supplies the chord and the rhythm. As such, he is not the soloist and busy rhythms of complex strums encroach upon the lead players territory.

Finally, the progression is given in A major, so all the fingerings learned for the major and minor pentatonic scales will have to be moved on the neck to match the key. The key of A was chosen since it is an excellent guitar key and offers available notes for soloing in positions on the neck both higher and lower than the mid-neck location where most of the progression is played and the easiest scale fingerings are found.

IMPORTANT: In the current graphic, the second A7 chord in the second line should be placed over the G7 of the first substitution. This error will corrected shortly.
Posted by Richard Metzger at 6:28 PM