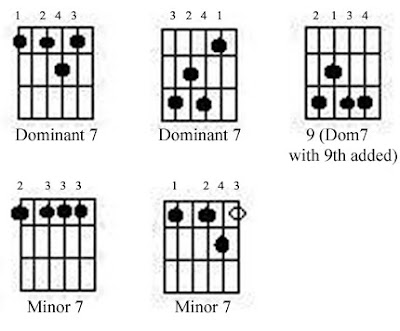 The chords used in jazz and blues differ from the chords used on guitar in most music in that they do not contain doubled notes. In a standard first position G7 chord, the notes are, from highest to lowest, G-B-D-G-B-F. There are three G notes and two B notes. While this sound of a chord this dense is appropriate, necessary, and satisfying for many styles of music, it is not desirable in the more open textures of jazz and blues.

Jazz and blues chords for guitar usually contain no doubled notes, that is, only one of each of the different notes. This arrangement gives jazz and blues chords greater flexibility to be used to create a wide variety of effects through alteration or placement in different positions. The two chords given are the preferred basic configurations for this style of music. In the charts above, strings that are not given a finger assignment are not played. In each chart, the lowest note in the configuration is the root of the chord.

The 9 chord is included here. It should not be applied indiscriminately in place of dominant 7 chords since not all dominant 7 chords will accept this type of 9th, but it can be used in the posted progression where indicated to add the "hot" factor.

In notation, minor 7 chords contain the name of the root and the symbol "m7." Hence Gmaj7 or G7 are not minor chords, but Gm7 is.
Posted by Richard Metzger at 11:56 PM